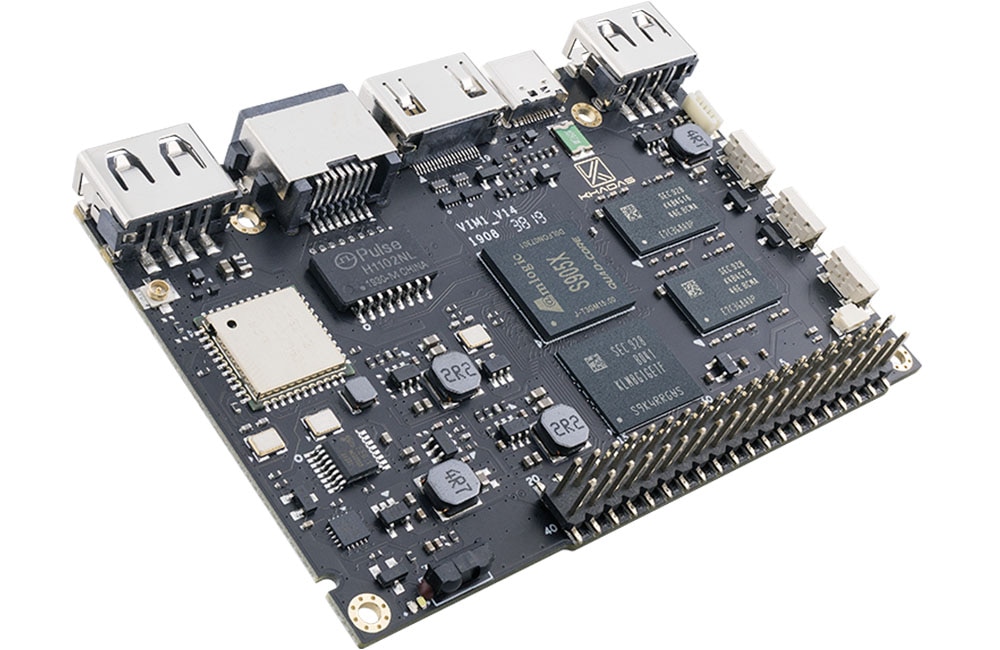 Amlogic S905X SoC
1.5GHz 64-bit Quad-Core ARM Cortex-A53 SoC
Mali-450 GPU
HDMI 2.0a with 4K H.265/VP9 10bit & HDR10 Video Processing
Flexible Connectivity
USB Type-C for power, and USB 2.0 OTG support
Maker Friendly
Built-in RTC, VIN-port, 40-pin GPIO, x3 user buttons, hardware encryption
​Multi-OS
Android 7.1 pre-installed, Android 8.0, LibreELEC, Ubuntu 18.04 and Buildroot
Built-in Memory
2GB DDR3 RAM, and up to 16GB EMMC-V5.0 storage
Built-in Wi-Fi
AP6212 b/g/n or AP6255 802.11b/n/g/ac, with Bluetooth 4.2
​Tiny Form Factor
Thin and light with the dimensions of a credit card
DESCRIPTION
VIM1 is the original Amlogic S905X ARM development board designed by Khadas for hobbyists, makers and electronic fans; many also affectionately refer to it as an “Open Source TV Box”. It is tiny, slightly smaller than a Raspberry Pi with dimensions similar to that of a credit card. VIM1 is only available in two versions: VIM1 Basic with 8GB EMMC storage and AP6212 (b/g/n) Wi-Fi, and VIM1 Pro with 16GB EMMC storage and AP6255 (b/g/n/ac) Wi-Fi. Both versions have 2GB of DDR3 RAM and Bluetooth 4.2.
Just like your familiar desktop computer, the VIM1 single board computer supports the booting of multiple operating systems. You can choose from a variety of OS images (ROMs) from our Khadas Docs or Community Forum. Popular OSes include: Android 7.1 / 9.0, Ubuntu 18.04, LibreELEC, Armbian, Buildroot, and so on. There are even dual-boot images, for developers to boot both Android and Ubuntu from the same EMMC.
Developers will find the built-in 40-pin GPIO, real-time-clock (RTC) and VIN port for an extra power supply, to be very handy. In addition, the three user-buttons on the side provide easy access to power, reset and function keys. Full open source code is available on Github, and hardware schematics can be found in our documentation. To top it all of, there’s even a built-in power control unit for supporting power-cycling via a remote control.
In comparison with the Octa-Core Amlogic S912 SoC in the VIM2, the Quad-Core S905X SoC in the VIM1 generates significantly less heat. This makes the VIM1 especially useful in environments that only allow passive air convection for heat dissipation, rather than forced airflow. In many instances, a single heatsink is sufficient, and some users may even find a heatsink unnecessary for their applications.
MULTI OS
BUILT BY THE COMMUNITY, FOR THE COMMUNITY. 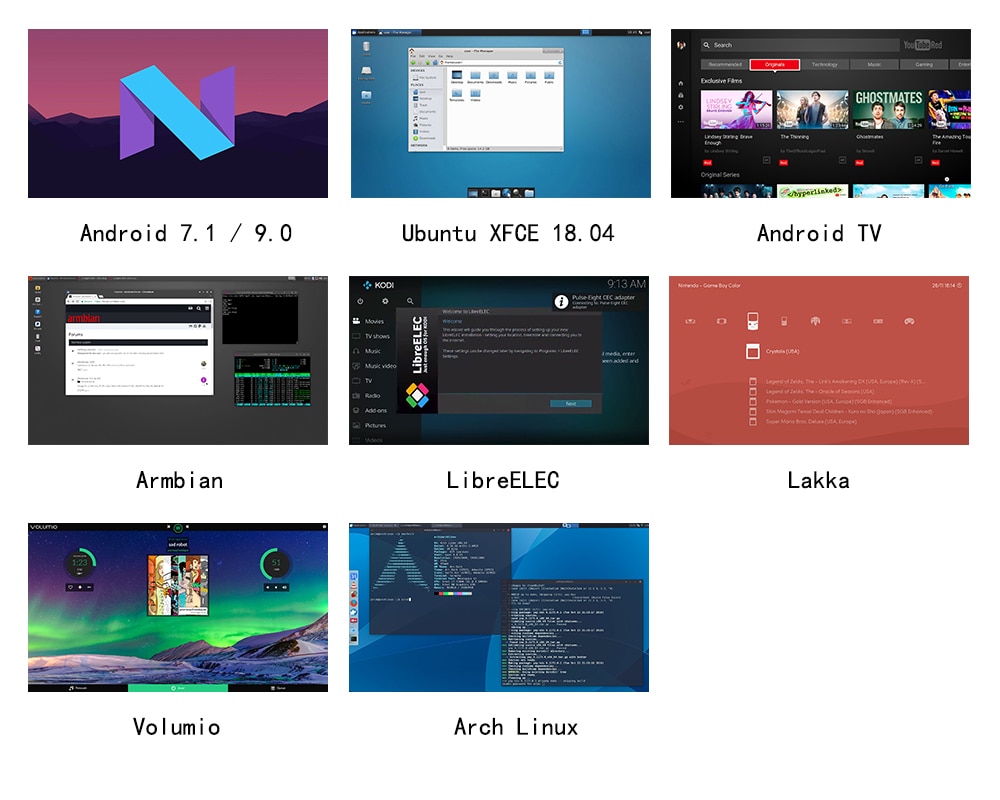 How to install
SOFTWARE
EXECUTE ESSENTIAL SOFTWARE FOR DEVELOPERS 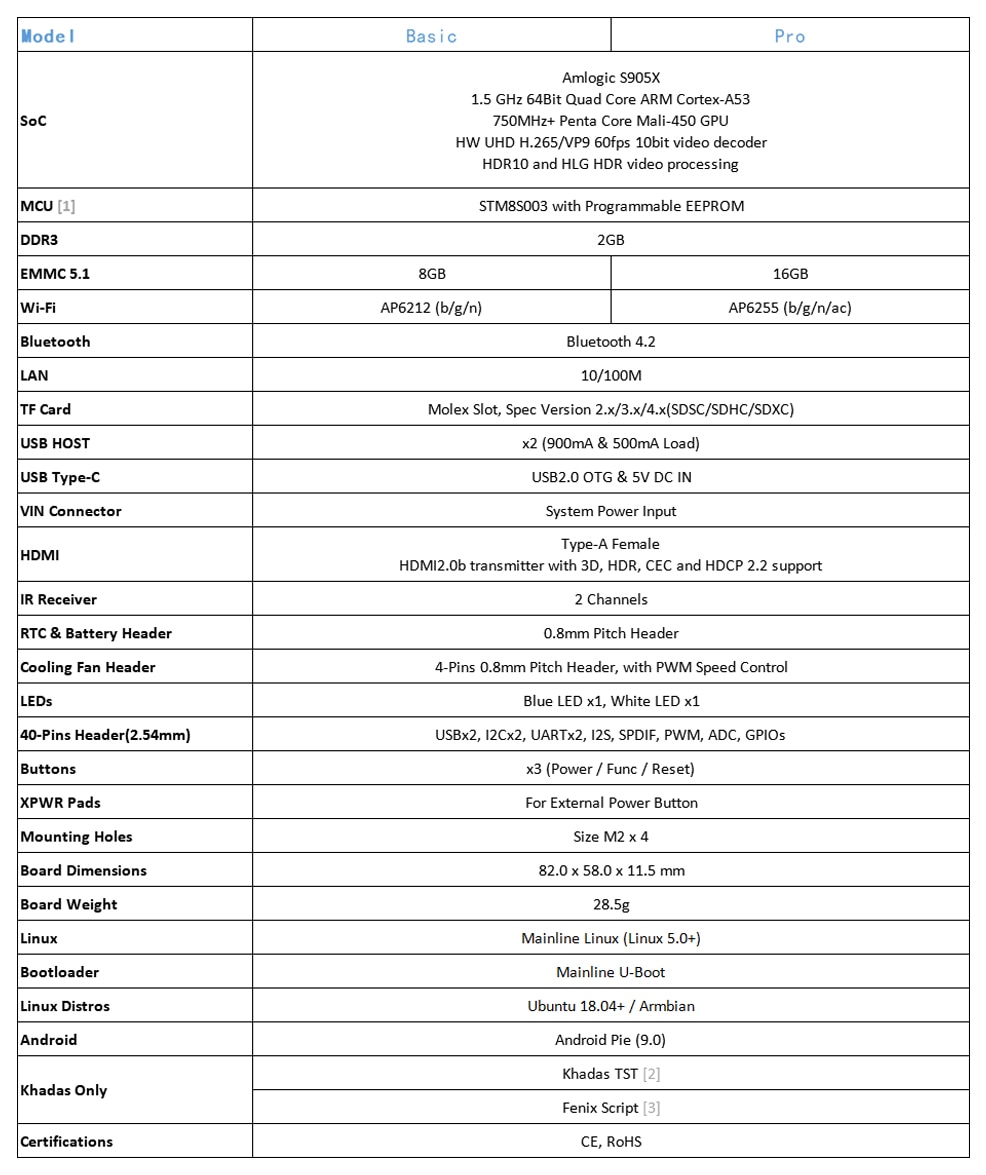 FAQ
Q:Why does the tracking system show no update after I've received my tracking number?
A:Usually China Post will update the tracking information to www.17track.net after 8-10 days.
Q:Should I bear the shipping cost?
A:We will provide “free shipping” by China Post. Alternatively, you could also pay for express shipping, and your package will arrive within 1 week.
Q:Where can I check the tracking information for my package?
A:You can check your tracking information from www.17track.net. The website supports multiple-languages.
Q:How long will it take for my package to arrive?
A:You can refer to this detailed data-table. Please note that the statistical data is only for reference, the specific time is subject to dynamically changing conditions.
Q:What should we do when we encounter technical problems?
A:You can submit your questions directly to our forum, and our engineers will reply to you as soon as possible.https://forum.khadas.com/
Q:Where can I find ways to install the software?
A:For software installation or product details, please visit https://docs.khadas.com/

Very cool little board. The Android image that came on it is nice for proving it boots &amp; such. I've already replaced that with an Armbian_20.08.0-trunk_Kvim1_buster_current_5.7.19 image I built from the armbian-builder tools on GitHub. I'm very happy.

It is nice product. Thank you for your goods.